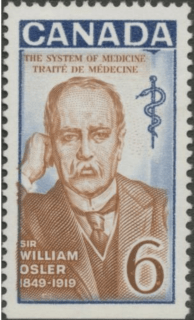 Sir William Osler is known as the Father of Modern Medicine. He was a charismatic physician, professor, speaker and author, and by the time of his death, he was one of the most influential and best-loved physicians in the English speaking world. He obtained his medical degree at McGill University, and served as a member of the McGill Medical Faculty. Throughout his life and extensive career, he maintained close ties to this university.

Sir William Osler brought a teaching style that revolutionised the way physicians were taught in North America. He began bringing his medical students out of the lecture hall for bedside clinical training and brought a more human style to. He was quoted as saying about his medical students, "Take him from the lecture-rooms, take him from the amphitheatre - put him in the out-patient department, put him in the wards."

This was a teaching method that, although practiced in Europe, was not practiced at all in North America. And by teaching this style in the prestigious medical school of Johns Hopkins Hospital, of which he was a founding professor, and advocating for students to learn from practicing, he revolutionised the medical curriculum in Canada and the United States. The system of postgraduate medical training and education that remains the standard for the Western world today was greatly due to Dr William Osler.

His medical textbook The Principles and Practice of Medicine: Designed for the Use of Practitioners and Students of Medicine was published in 1892 and propelled him as the leading authority on modern medicine. The text was translated into multiple languages and was considered the Bible of Medicine for more than forty years.

The Osler Library of the History of Medicine was established at McGill University to hold the priceless collection of books and manuscripts that Sir William Osler bequeathed to the University, and it is there that his ashes remain among his treasured books as well, at his request.

Don't want to miss a blog? Subscribe now and you will receive email notifications for our weekly post.

No comments made yet. Be the first to submit a comment

By accepting you will be accessing a service provided by a third-party external to https://www.physiciansforyou.com/